In 2016, we were blessed to spend two weeks in Colorado, one of my favorite places in the world. We are so lucky to visit there often, because my family owns a condo in Beaver Creek Resort near Vail. We spent a week in this area and then a week driving through Aspen, Telluride and southern Colorado over to Colorado Springs and up to Denver to fly home.

About The RIDE Festival 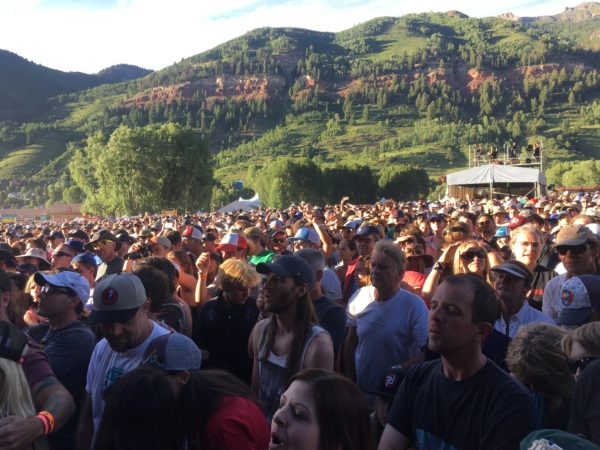 One of the highlights of this trip — and perhaps my life — was a rare opportunity to see Pearl Jam perform live in one of the most amazing venues I’ve ever experienced. It just so happened that our three-day visit to Telluride (our first time in this most gorgeous of towns — more on that to come) coincided with the town’s annual RIDE Festival, a fairly new festival in a town that is known for year-round festivals, that brings rock bands to the area. It is named after TelluRIDE ;-). 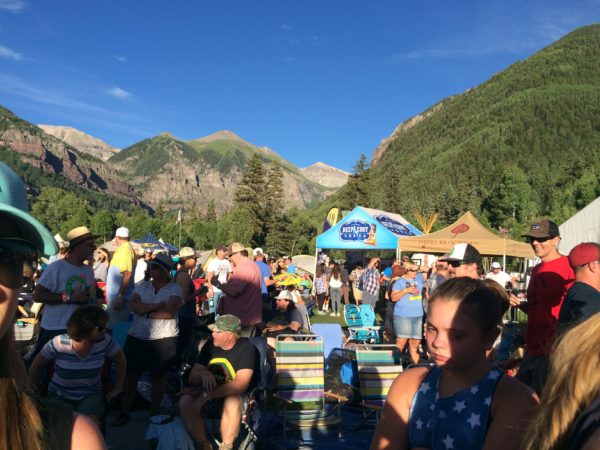 In researching the festival, my husband discovered Pearl Jam was the closing act Saturday night during our visit and subsequently about had a heart attack at the possibility of seeing this band in person :). I was able to secure a media pass, we purchased a ticket for him and our kiddos got in free – what a deal!

We spent one day at the festival, which was held in Telluride’s Town Park, a gorgeous park in a gorgeous town with mountains literally 360 degrees all around you. Plus, a few waterfalls also dotting the landscape – incredible – and a fantastic sunset between the mountains. 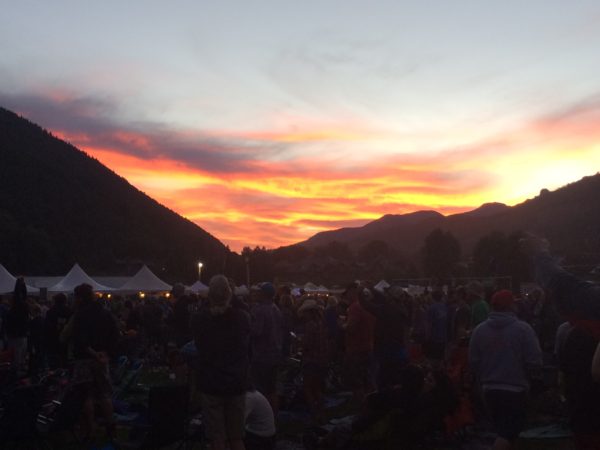 We saw several bands before Pearl Jam took the stage including Emmy-nominated Highly Suspect, the Dirty Knobs (with a former member of Tom Petty and the Heartbreakers), and Little Hurricane with their charming female drummer who served as a crush for  many a male in attendance :). 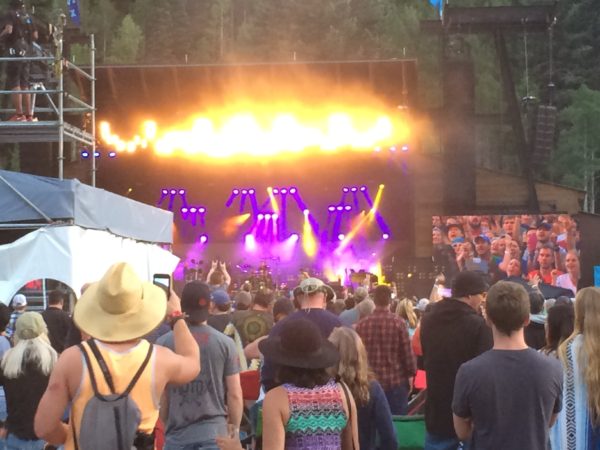 Seeing Pearl Jam in this very special venue in one of the most beautiful towns in the world was like nothing I’d ever experienced. I love to listen to a uniquely beautiful voice and I count Eddie Vedder’s voice among the tops of the best voices ever. So to hear him sing live, in person, as the sun set behind the mountains was simply surreal. I thought I would melt away during “Just Breathe.” It was one of the moments that you want to capture forever and never let slip from your mind — a moment when everything comes together in such a way that you understand this beauty is not happenstance; it comes from something much bigger and greater than ourselves. 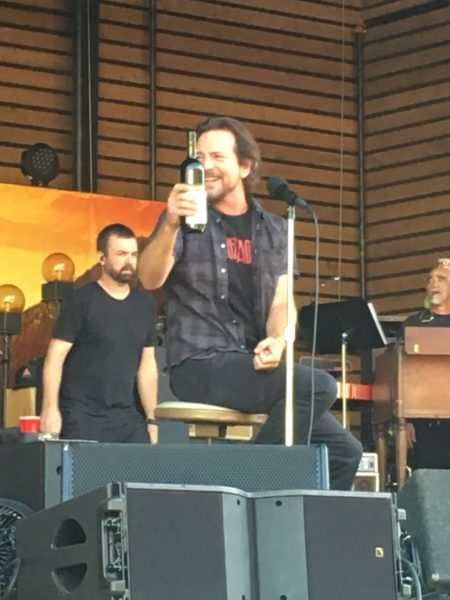 Eddie Vedder was amazing. You could tell he was truly entranced by the venue and was in a lighthearted, fun and chatty mood. He talked quite a bit, sharing funny stories and tributes and pointing out the beauty of the setting in front of him and how clearly he could see the stars.

My husband, who is a much longer and bigger fan of Pearl Jam than I, took the photo pass, which allowed us close access for photos for the first three Pearl Jam songs and got some of the amazing shots you see here. He is thrilled that he made eye contact with Eddie and that he’s now somewhere in Eddie’s brain ;-). 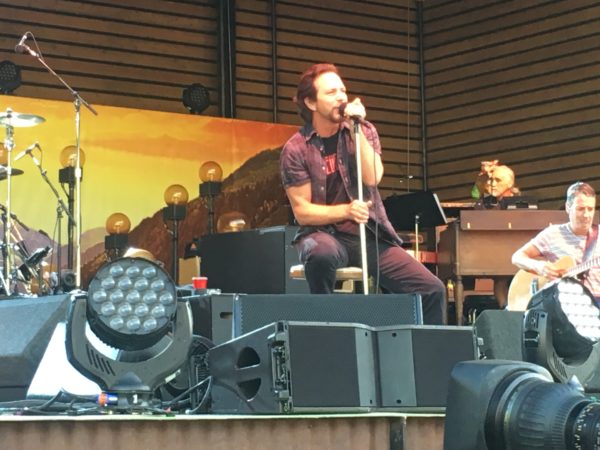 We heard from others who’ve attended past Pearl Jam shows that this was one of their best set lists ever — this from a band who changes their set list on a whim and depending on the setting. You never get the same show. We heard “Alive,” “Even Flow,” “Angel” (the first time since 1994), “Daughter”, “Better Man,” a fabulous version of Pink Floyd’s “Comfortably Numb” and “Yellow Ledbetter” as a lullaby goodbye, according to Vedder (see the complete set list). I truly don’t think he wanted to stop playing.

My husband and I will consider this one of the most special opportunities of our lives; not just to see and hear this band, but to be so close in such a naturally beautiful and intimate venue. Now, I have an itching to see them again. While it won’t be as special, it will be different: a new set list, a different town. We’ll see… 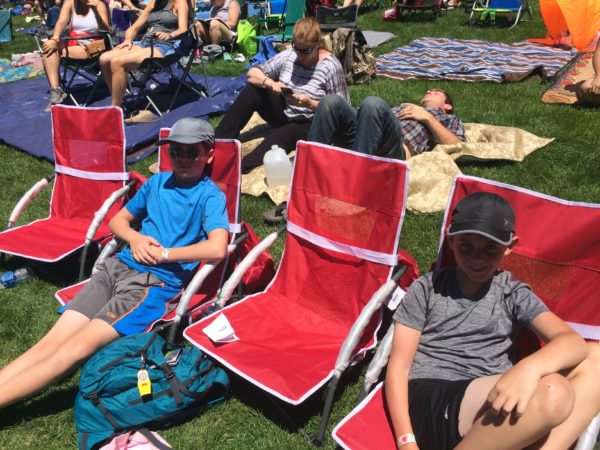 Our kids, while they hung in, can’t quite appreciate this opportunity for what it was, but I have no doubt, 20 years down the road, they will think to themselves, “Wow, when I was 8/12 years old, I saw Pearl Jam and I saw them in one of the most beautiful places in the world.” I hope that while somewhere in Eddie’s brain is my husband that somewhere in their brains is Eddie and the music of Pearl Jam, a band who shaped the course of music history…