We were of course saddened to see yet another attack, this time at Notre Dame de Paris in the summer of 2017. We were there not 24 hours before, as well as on the Sunday prior for Pencecost Mass. 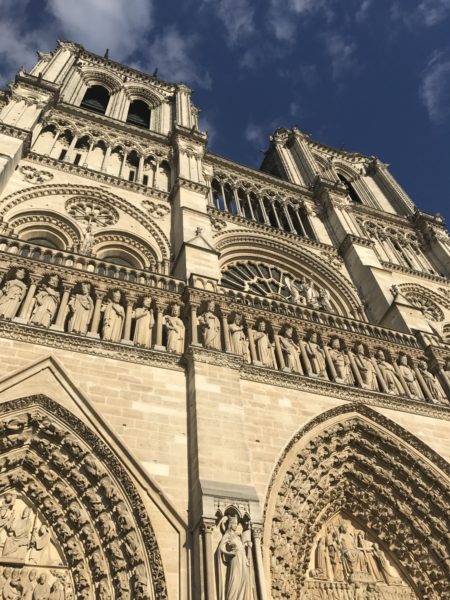 On our journey to Europe, our family and friends were all concerned for our safety as attacks ramped up in England, though London, one of the most volatile areas, was not part of our plans. We were sure to be extra cautious and aware of our surroundings as much as possible, but there is a limit to how much you can do. There is no way we would miss our first time to Europe as a family!

While at Notre Dame — and throughout Paris — there was a heavy police presence. Throughout the city, there were multiple police and soldiers carrying what appeared to be machine guns. Unnerving, yes, but also comforting.

I noticed an especially heavy presence of police at Notre Dame, which made me wonder if there was some intel that resulted in more personnel. We determined not to hang around the area long that day.

There is a large open area in front of the church packed with people — many lined up to walk into the church — that could be vulnerable, though there was a least one or two police cars blocking it as a sort of barrier.

We enjoyed our time at Notre Dame. As a Catholic, it was an amazing church to experience, and we were able to attend Mass on Pentecost Sunday presided over by the Archbishop of Paris, who made the sign of the cross blessing us as he processed both in and out. Incredibly special and truly once in a lifetime.

We were ushered out quickly after mass, because the church closes, so we decided to return the next, as the apartment we rented from HomeAway (totally charming and located in Saint Germain des Pres neighborhood on the Left Bank — see Instagram for photos) was just a 10-minute walk away.

We then headed around the backside to get some photos and a view of the famous flying buttresses, enjoying a young girl expertly playing violin alongside. Sidenote: Did you know Notre Dame is actually on an island on the Seine? It is called Ile de la Cite.

Would I have done anything different now that I know what happened after we visited? I don’t think so. I strongly feel we cannot let terrorism drive us from normal activity. I’m not willing to stop traveling to these countries because of their horrible acts!

As a mom, my most important job is to protect my kids, but at the same time I don’t want them to be too fearful to do anything. I’d rather they act fearlessly, enjoy life, travel wherever they want, but with a healthy dose of caution. It is equally important to teach them to notice any strange behavior and get yourself away from it very quickly, but at the same time I do not want them to be paranoid and do my best to keep them from news of violence.

As one example was an experience we had in Paris at the Eiffel Tower. After going to the top, we were headed back to our Big Bus Paris tour, only to notice a group of men running off with some of the souvenir sellers’ gear.

It turned into a whole scene with the police holding them until backup could arrive. It struck me as a possible diversion for something larger. We hurried on the Big Bus and got away from the area. Nothing else happened as far as I know.

What do you think about these attacks? Do they deter you from going to Europe? I can tell you I already want to go back to Paris 🙂 despite what’s going on. In fact, I’m secretly planning a month’s stay next summer… Shhh…