Would you like to earn a Southwest Companion Pass but can’t or don’t want to sign up for a new Southwest credit card? Here’s a great story of how one Go to Travel Gal reader Denis B. earned his pass with no new card sign-ups.

Lyn has also earned her pass this way THREE times. Here’s how she does it.

The Southwest Companion Pass is THE best deal in travel and it allows one person to fly free with you from the time you earn it until the end of the following year. Download Lyn’s 10 Things You MUST Know to Earn the Companion Pass cheat sheet below:

How Denis B. Earned the Southwest Companion Pass With No New Card Sign-ups 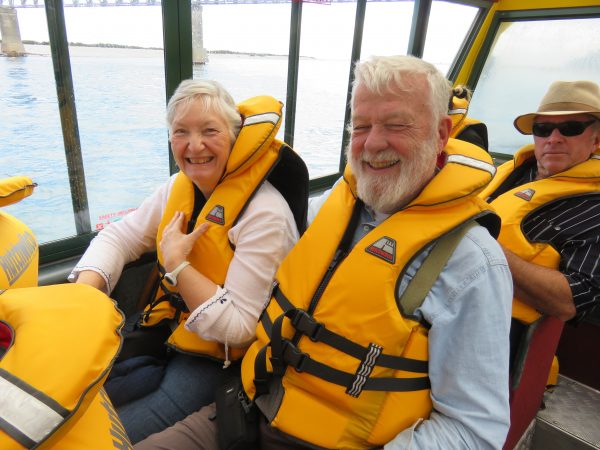 Denis and his wife in New Zealand. He says they fly Southwest to get to a departure city for their international flight.

Go To Travel Gal reader Denis B., who travels extensively throughout the US and internationally, earns his pass with out applying for any new credit cards. In fact, he says he’s done is this way for the last FIVE years!

In addition to using his Southwest card to pay for travel and flights, he also uses it to pay for these recurring expenses so he can earn more Companion-Pass qualifying points:

“I always ask if I can pay by credit card, even if they have said no previously, because more and more businesses are going that route,” Denis says.

In 2019, he used his Southwest credit card to book his kids and grandkids on an Azamara cruise so they could experience small luxury cruising as a family.

Denis charges all of the flights for he and his wife on his current Southwest credit card, which earns him 2 points per dollar. This usually gets him close to meeting the 110,000 (currently 125, 000 points) Southwest points required to earn the Southwest Companion Pass.

Then in addition to using those points to qualify for the pass, he can ALSO use those same Southwest points to book free flights for the rest of the year.

How Denis Uses His Companion Pass

He says they love to use their Companion Pass to see grandkids! “Having grandkids in Austin, Texas, and near Jacksonville, Florida, allows us to go often without spending a fortune on air,” Denis says. “We used to drive, but with the Companion Pass, it not only saves us money but gives us more time with family.”

He and his wife also travel internationally several times a year and like to use the pass to get to an international airport from their home airport.

“We generally fly to an international airport on Southwest and either spend a day or so there or just transfer to our international flight later in the day,” he explains. “Going east to Europe works out well, because most of the flights depart in the evening, giving us plenty of time.”

How do you earn your Companion Pass? Email your story and a photo to Lyn at gototravelgal.com for a chance to be featured!