I’m a fan of seeing a new destination on foot if it’s at all possible.

There’s nothing quite like being out in the open air, smelling the food cooking from local bakeries and restaurants, interacting with locals and seeing the sites from outside of a car or tour bus window, especially when visiting some of the world’s most walkable cities.

This post is sponsored by Stasher, but all opinions are my own!

If you’re staying at a hotel that is in an area’s city center or close to public transportation to get you there, it’s easy enough to pop out your door and off you go.

But if you’re  in transit — say you have a layover until your next flight or you’ve disembarked from your cruise ship and are awaiting the time to head to the airport — you may want to see a destination on foot, but have the worry of dragging your luggage around, too.

That’s where luggage storage services like Stasher come in uber-handy! They have locations throughout major cities around the world, like New York City, Sydney, Las Vegas and Madrid near convenient places like ports, train stations and airports, that let you securely leave your luggage — for a low fee — so you can see the city without bringing your bags along for the ride :).

Here are five European cities that are definitely worth storing your luggage, so you can get out and explore with as much time as you have!

5 of Europe’s Most Walkable Cities

Many European cities are wonderful places to see on foot. Most were designed before the age of cars, so they are naturally small and created with a walker in mind.

Nothing beats peaking in nooks and crannies, down hidden alleys and squares, finding cozy, quiet cafes and restaurants and speaking the language as you interact with its residents.

Here are some of my favorite walkable cities in Europe. 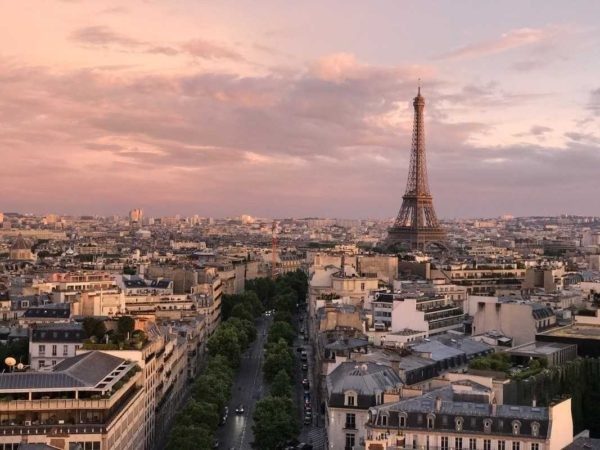 Perhaps my favorite city in the world, as its architecture and design is beyond comparison, Paris is simply meant to be explored on foot.

Passing bakery after bakery with the smell of chocolate and bread and all manner of sweets fill the air, as you meander along the banks of the Seine, take in its grand streets and marvel at the glorious architecture that hearkens to a grander time, Paris is a delight to behold.

The first night we arrived in Paris, we hopped out the doors of our Hotel Indigo Paris Opera and made our way down to the Place de la Concorde, the Tuileries and the Louvre and enjoyed the city as night fell and it lit up. Magnificent!

There are certainly spots that would be too far to walk from more central parts of the city like Sacre Coeur, the Moulin Rouge, Pompidou Center and some parts of the Left Bank, but it’s easy to hop a ride on the Metro to get a bit further out and then walk once you arrive.

In the City of Light, you can find Paris luggage storage near Montmartre (close to Sacre Coeur), the Eiffel Tower, several train stations, the Palace of Versailles and even Disneyland Paris!

We visited Florence on a trip to Italy, exploring Tuscany. Florence is the capital of the Tuscany region and the largest city in the area.

We spent about a week in Tuscany (read about our trip here), exploring many different hilltop towns from our home base of San Gimignano, and decided to make a visit to Florence a day trip.

We hopped a train from the Poggibonsi train station to Florence, which took us less than two hours in total, and we found a day to be a good amount of time to see the main sites of Florence — on foot.

While it’s a bit of a haul from the main Firenze (what Italians called “Florence”) train station on foot (about 25-30 minutes), once you’re in the main section of the city, it’s easy to see the sites walking. We were able to see the Statue of David, Florence Cathedral (we even climbed to the top of Brunnelleschi’s dome!) and Baptistry, the Ponte Vecchio (famous bridge) and the Uffizi Gallery. We even walked back to the train station at the end of the day.

To say we were tired is putting it mildly, but it was worth it to see beautiful Florence.

Want to leave your luggage behind for a bit in Florence. You’ll find Florence luggage storage with Stasher near the train station, Florence Cathedral, the Uffizi Gallery and more.

Because we flew to Europe entirely on miles via Aer Lingus, the national airline of Ireland (here’s how we did that), we had to fly to Dublin to take advantage of the deal. Although, we largely planned to spend our time in Paris and Italy, we turned our stop-off in Dublin into an opportunity to explore the city in a day.

Dublin is very walkable. While we stayed at the InterContinental Dublin in nearby Ballsbridge, which is not within walking distance to the city center, we found it easy to take an Uber, cab or one of the city’s double-decker buses into the historic city center where we could then explore on foot.

We started at the Guinness Storehouse, which is the most visited attraction in all of Ireland, and I highly recommend it, not only to learn how to drink — and pour — this famous brew, but for the building’s fantastic 360-degree views of the city.

We then explored St. Patrick’s Cathedral, took a stroll down Grafton Street filled with shops and street musicians, wandered through St. Stephen’s Green park, and then explored Trinity College, one of the oldest colleges in Europe, to see the Book of Kells, an illustrated version of the Bible’s four gospels, dating to 800 A.D.

Find Dublin luggage storage near the Temple Bar district, as well as bus and train stations.

Rome is another of my favorite cities (here are my top 50 things to do in Rome), which it’s difficult to truly get a sense of without just getting out and walking around. The city’s subway is not super convenient to most attractions (aside from the Colosseum), so for longer distances, I recommend taking the city bus (buy tickets using cash at a tabacchi store) or taking one of the city’s white cabs.

Keep an eye out for motorbikes and regular bikes, as these are plentiful and Rome. Be sure not to step in front of one when you cross the road. Some of Rome’s streets are daunting to cross. I tended to just get with a crowd of people and cross when they crossed :). You do have to walk with confidence!

There’s lots to see around the Colosseum that you can explore by foot like the Arch of Constantine, The Circus Maximus, Palatine Hill, the Roman Forum and the Baths of Caracalla.

Outside of this area wander around the lovely Spanish Steps and surrounding neighborhood, plentiful churches, the Via Giulia (the prettiest street in Rome), its many squares and of course the Pantheon and Trevi Fountain.

Vatican City is also small and easily seen by walking. 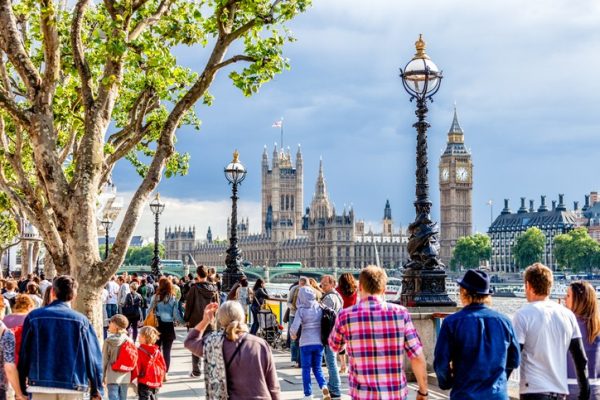 Combine walking with the “tube” (London’s subway) to see as much of this city as you can. Don’t forget that cars drive on the opposite side of the street as in the U.S., so be careful as you’re crossing roads!

Transport for London offers some great walking routes for exploring the city, such as the 15-mile Jubilee Walk, which takes you past some of London’s most famous landmarks. These include Buckingham Palace, St. Paul’s Cathedral, the Tower of London, Tower Bridge and Trafalgar Square.

There’s also a lovely flat route alongside the River Thames. If you have the time, the Thames path runs for another 184 miles, so you could walk as much of that as you like.

Another great place to walk are along one of London’s many bridges, which not only are lovely, but provide a great view of the city.

There are plenty of London luggage storage options, including sites near the Tower of London, Piccadilly Circus, Wembley Stadium, Kings Cross station and many more.

What walkable city on Europe is on your list?

1 thought on “5 Most Walkable Cities in Europe”