Designed to insert visitors directly into some of their favorite stories and movies, from “Green Eggs & Ham” to “Spiderman,” Universal Orlando’s Islands of Adventure in Orlando, Florida, is a 110-acre playland. Appealing to all ages, with plenty of rides for the youngest members of your family to monstrous coasters that attract teens and thrill-seekers, Islands of Adventure is packed with enough entertainment to keep you busy for several days.

While it’s easy enough to find your favorite thrill ride or 3-D adventure on the park map, there are even more experiences to be had with a little insider knowledge.

Here are seven of the activities that most park-goers don’t even know about that should definitely make your next Islands of Adventure agenda.

Visit the Discovery Center in the Jurassic Park area for a chance to see a baby Velociraptor hatch just like it did in the movie. “Scientists” are on hand to explain the process and help the hatchling along. Here, you can also use DNA testers to see what type of dinosaur you would be and see a full-size replica of a T. rex.

2. Take the plunge on the longest water descent ever built

My family and I were shocked at the depth of this 85-foot plunge at the end of the theme park’s Jurassic Park ride. Beware, you will indeed be soaked when all is said and done, but it’s definitely worth getting wet. Either hop on the ride when you’re ready to cool off or follow the lead of other experienced riders and don a poncho.

3. Eat a green eggs and ham sandwich in Seuss Landing

Your kids will love the chance to try green eggs and ham in real life at Seuss Landing, the world of Dr. Seuss brought to life. Should your brood decide they don’t care for green eggs and ham, they can also refuel on hamburgers, chicken fingers and other kid favorites. You can’t miss this restaurant, which is shaped like a ham with a fork on top.

4. Speak with the Mystic Fountain on the Lost Continent

Head to Sinbad’s Bazaar in the Lost Continent area of Islands of Adventure for the chance to talk with the Mystic Fountain. This mythical creatures loves jokes and riddles, and if you answer incorrectly, be prepared for a spritzing. Go ahead and make a wish by tossing in a coin… and see what happens.

5. Mail a letter postmarked from Hogsmeade 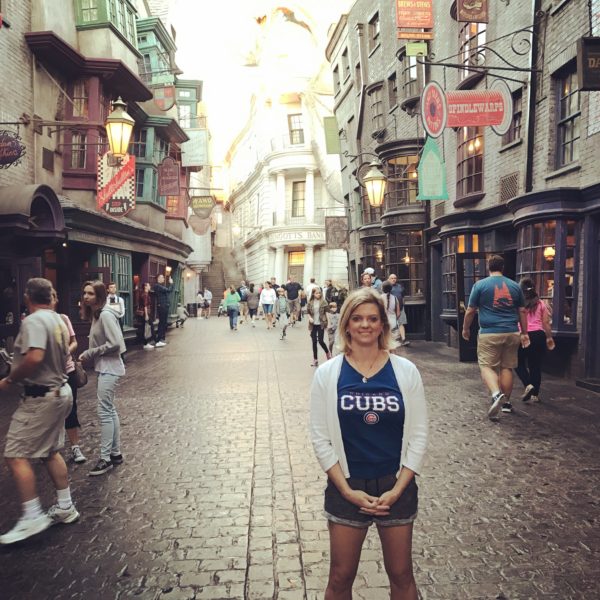 When visiting the Owl Post at The Wizarding World of Harry Potter, fans have the chance to send their very own postcard postmarked from Hogsmeade to their friends and family back home. Drop them at the Owl Post, where you can also find Harry Potter stamps and stationery. It may not arrive by owl, but it’s still a one-of-a-kind souvenir.

6. Let a wand “choose” you at Ollivanders

As avid Potter fans know, Ollivanders is the shop where the wand selects its wizard or witch. Though only a lucky few park-goers get the chance to actually have a wand “choose” them, anyone can buy their own interactive wand and use it throughout Diagon Alley and Hogsmeade village.

With your wand, you have the power to “cast” spells and see how your incantations play out. Spell locations are marked by medallions set in the pavement, which indicate where you can stand with your wand to perform a spell (activate a sensor). With the proper flick of the wrist, you can set magic in motion like cause a fountain to spout water or give life to a motionless suit of armor.

7. Eat at one of the world’s best theme park restaurants

Theme park fare is usually limited to burgers, hot dogs and fries, but Mythos (located in the Lost Continent area of the park), steps up the flavor game. Here you’ll find a contemporary menu with dishes like seasonal risotto, seared salmon and blackened fish tacos.

Voted one of the world’s best theme park restaurants by ThemeParkInsider.com, Mythos is also a hit thanks to its unique location: the eatery is set amidst a cavern carved from rock. There’s also outdoor seating with views of the park’s inland sea.

This article originally appeared on US News & World Report.

Did you know there’s also a Universal Studios Hollywood? Here is Trekaroo’s guide to the Wizarding World of Harry Potter in Hollywood.