Earlier this year I took advantage of the Southwest Airlines credit card offer enabling me to earn the Southwest Companion Pass by simply applying for the card and meeting the minimum spend.

I was so excited and had all kinds of ideas of how to start using the pass!

Finally, in September, my husband and I were able to book our long weekend in San Antonio to celebrate our anniversary. Not only was this our first time using the pass, this was my husband’s first time flying Southwest! 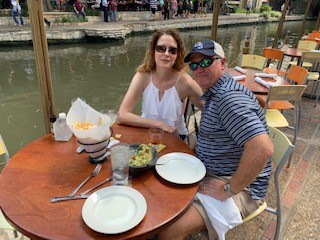 He’s always flown Delta and could not get past not having a seat assignment ;-). I was able to do some convincing, and because it was a short flight I said, “How bad can it be?” As I suspected, he loved it and said he would do it again! YAY!

We didn’t have a lot of luggage, because it was just a weekend trip, but we decided to check a bag, so my husband could see how easy it is, and FREE! Everyone gets two free checked bags with Southwest.

We walked right up to a kiosk, pulled up the Southwest app on his phone and scanned in his boarding pass (you can type in your confirmation number, too). The luggage tag printed, and we used the easy instructions to attach it to his bag. We then walked up to the counter, no waiting, and the super nice Southwest employee placed our bag on the conveyer and sent it on its way. It could not have been easier.

Next, we were off to the gate. Upon arrival, my husband was taking in the boarding area and figuring out that the process is very organized and not just a mosh pit of people pushing and shoving to get the best seat (I really think that is what he thought was going to happen).

He saw the TV screens overhead and the silver columns with numbers. Each column shows four numbers in front and four numbers in back, so four people in number order line up by that column. The first 30 people line up on the left and the next 30 on the right. These numbers coordinate to the boarding order you received upon check in. (More about mastering Southwest check-in HERE.)

We were able to check in right at the 24-hour mark, but still ended up in boarding group B, which was not a problem for us at all. First they called all the A-listers, next the people who needed assistance, then eventually section A. We watched as all of the section A passengers politely lined up in their group of numbers and got in numerical order.

Next, it was our turn. We lined up by the silver columns, filed into line, showed our boarding passes on our phones and off we went.

Once on board, my husband and I were looking for an aisle and a middle seat together. Most of those had been taken, and I was getting a little nervous that we might be by the toilets in the back or split into two different middle seats. But as we approached the back of the plane, there were open seats and we ended up together in an aisle and middle and had plenty of overhead room for our one carry on bag.

The flight was smooth, and my husband was impressed with the free wi-fi that lets you have in-flight entertainment right on your own personal device. He also noticed that the flight attendants come take your drink order instead of rolling out the cart like other airlines. This was great for keeping the aisles open for people who need to move about the cabin. We also got our Ritz Bits and pretzels to go along with our drinks, which was plenty for this short flight. Finally, we landed and the exit from the plane was as smooth as the boarding.

All in all we had a wonderful experience using our new Southwest Companion Pass and Southwest has a new loyal customer.  Now where to go next…