Our time in Paris was truly magical and already my heart longs to go back. Something about Paris really “grabbed” me – the French people, their food, the language, the architecture, the beauty… I could go on 🙂

During the second half of our stay in Paris, we enjoyed time on the Left Bank, the more “artsy” and less upscale side, in the Saint-Germain-des-Prés neighborhood in a cozy apartment we rented from HomeAway (property ID is 161344 if you want to look it up). This allowed us to really feel like we were a part of the fabric of this neighborhood, which utterly charmed me.

Here, the buildings are closer together, people speak less English, the cafes are spilling out the doors, live musicans play in the streets, there are actual supermarkets for groceries and it feels like people are living life as Parisians. Oh, how great it would be to come and stay a month here and get into a routine like the locals. How I would love to wile away an afternoon at a cafe every day…

Ever since visiting Paris, I’ve been dying to learn French. So far I’ve used the free website Duolingo, which I really like, but check out this great review of how to use Rosetta Stone as a family from TravelMamas.

While here, we took time to stroll through the Luxembourg Gardens created by Queen Marie de Medici in 1612 with geometric hedges, English gardens, a pond, and more than 100 statues and fountains. I could certainly see myself hanging here for the day with a good book, a baguette and perhaps a bottle of wine. We also meandered through the Latin Quarter, which houses the Sorbonne and thus many students.

We also spent an afternoon at the Musee d’Orsay, a museum on the Left Bank housed in a former grand train station built in 1900 and featuring Impressionist art. There are works by Monet, Manet, Cezanne, Van Gogh (including his self-portrait), Renoir and Degas. I was excited to see “Woman with a Parasol” by Claude Monet, which hung in my college dorm room as a much-beloved poster :).

The museum, like many in Paris, is free on the first Sunday of the month when we happened to be there. Yes, it was busy, but not uncomfortably so, and we waited for probably 45 minutes in line to get into the museum.

When I asked people what we should see in Paris, we often heard, “You must visit the church, Sacre Coeur,” and so we went! Sacre Coeur, which means “Sacred Heart” (of Jesus) is a Catholic church newer than many you will find in Paris (built in the late 1800s), is dedicated to perpetual adoration of Jesus in the Eucharist.

For those of you who are not Catholic, Catholics believe that the bread and wine are actually transformed into the real body and blood of Jesus Christ at every Mass. This is called the Eucharist. Most of the Eucharist is consumed by massgoers, but the priest will leave some in a locked container, or ciborium, which anyone can come and sit in the presence of, still in the form of the real Jesus Christ. This is called “adoration.”

Sacre Coeur is dedicated to continual adoration of Jesus in the Eucharist. Jesus is always present there and there is always someone sitting with Him. This has gone on uninterrupted since 1885! You can identify the “real presence” in any Catholic church by looking for a red candle indicating Jesus is present in the Eucharist.

At any rate, we visited this striking white church, which is set way up on a hill in Paris, requiring you to climb 270 stairs to get there (there is also a funicular that will take you up). But the view of the city is certainly rewarding! You can see Sacre Coeur sitting up on its high hill from much of Paris and it is quite beautiful.

Sacre Coeur is located in Montmartre, meaning mount of martyrs because early Christians were martyred here. Montmartre was an area popular with artists in the late 1800s to live and work and has been home to Van Gogh, Picasso, Renoir and Toulouse-Latrec. It, too, is totally charming, though quite touristy these days, with winding brick roads and buildings laden with flower boxes, but literally filled to the brim with visitors.

Nearby, we discovered another small church that to my surprise housed a relic of my confirmation saint, St. Terese of Lisieux of France. In further reading, I realized she visited this church with her father on pilgrimage.

Built on the orders of Napoleon in the early 1800s to commemorate his victories (though he never saw its completion), the Arc de Triomphe is certainly one of the most famous landmarks in the world. While we were able to see it on the Big Bus Tour of Paris,  we wanted to get a closer look.

While we were there, it had just rained and we were rewarded with a rainbow that appeared suddenly over the top of the city. Just beautiful and so incredibly special!

Climbing to the top is included in the Paris Museum Pass, which for 48 Euros gains you entrance into most of Paris’ museums for two days. You can also get four-day and six-day passes, which are more expensive.

For our final night, we capped it off with a boat cruise of the Seine with Bateaux Parisiens. The cruise company runs trips down the Seine every half-hour throughout much of the day.  You don’t even need reservations; you can show up at their departure points beneath the Eiffel Tower or by Notre Dame. 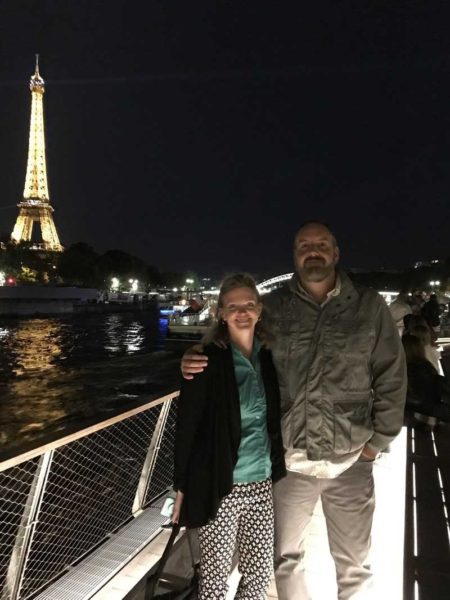 I always enjoying seeing a city by water, as it gives you an entirely different perspective. The cruise takes you past the Eiffel Tower (we did it at night so we could see it lit up), a MAJOR highlight, as well as Notre Dame de Paris, Musee d’Orsay, and many other landmarks.

As you cross under the river’s many bridges, including the famous — and oldest — Pont Neuf and Pont Alexandre III, which features golden statues and has been in many movies, passengers hoot and hollar, I suppose to hear the echo of their voices on the bridge. Local Parisians who fill the banks of the Seine, kissing, chatting and drinking wine, wave as you pass.

We were sad to say goodbye to Paris, but ready for our next adventure — on to Italy!

Read more of our adventures in Europe:

Find out how I flew all four of us to Europe entirely on miles:

How to Fly a Family of 4 to Europe on Miles