When you’re visiting Disney World or Disneyland, your feet and legs are already exhausted from walking between rides, so searching for a decent restaurant which requires even more walking need not add to it. With our tips, you’ll easily have at hand some of the best Disney restaurants so you can better plan your day.

My family has been traveling to Disney since my husband and I married in 1999 (that sounds like a million years ago! ;-)), and he’s been visiting Disney World every year, since he was a kid (he’s the one that knows all the shortcuts of how to get anywhere, especially at Magic Kingdom).

So it’s fair to say we’ve eaten at a fair amount of Disney World and Disneyland restaurants. 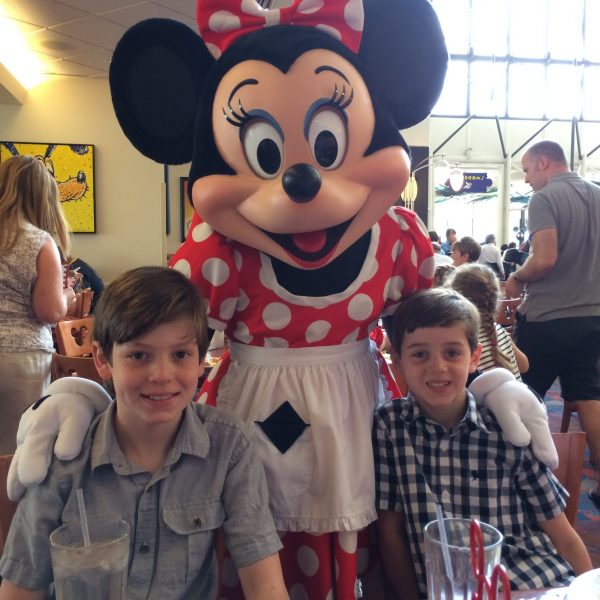 Over the years, the food at Disney parks has improved dramatically, but there are still a few places we avoid at all costs and a few places we MUST hit every time we visit.

We’ve compiled some of our family’s favorite Disneyland and Disney World restaurants for you.

[5 Clever Tricks to Save on Disney World Dining and Food]

Here are the restaurants that top our list at each Disney park both at Walt Disney World in Orlando and at Disneyland and Disney California Adventure in California.

We like to try and make reservations in advance for this restaurant in Fantasyland.

Even though this is tied to “Beauty and the Beast” and I am the only girl in our family, we all still love it.

The food is French and there are several rooms to choose from, including Beast’s Room where it storms complete with lightening, and you can watch the rose petals fall off one by one…

You can also go for the main ballroom shown above.

When you arrive, they’ll give you a “magic rose” to take to your table and then your food “magically” appears ;-).

You’ll get off cheaper if you go for lunch and have a better shot at a reservation if you eat at an “off” time like 3 p.m.

This has been one of my favorites for a LONG time.

It has really good comfort food like turkey and gravy served family style along with dressing and cranberry sauce all with a Colonial Williamsburg vibe.

Thanksgiving dinner anytime of year at Disney? Sure!

It’s a sit-down restaurant, however, and a bit more expensive.

My husband CANNOT visit Disney World without eating a Dole Whip (OK, multiple Dole Whips…), which is a bit like a pineapple-flavored ice cream, but super refreshing.

I must admit I’ve become a bigger fan over the years, but I’d never be able to eat one all by myself!

This is located in Adventureland and usually has a long line.

If you like soft-serve ice cream, this is the place to get both vanilla AND chocolate (they don’t all have chocolate, only this one :)).

We have a few soft-serve fanatics in the family, so we know where to get it at all parks.

Pretty good Mexican food along with burgers, sandwiches and salads if you find yourself starving in Frontierland.

Which Restaurants to Skip

Pinnochio’s restaurant might beckon you in with its promises of pizza and pasta, but we promise it’s better to skip and wait for your pizza until you get to Italy in Epcot.

There are SO many great places to eat in Epcot that it’s tough to narrow them down!

Grab a table at The Seas with Nemo & Friends, which offers a panoramic view of the 5-million-gallon saltwater aquarium. Cool beans!

I personally love the Nemo ride at Epcot, because I think it’s so clever how they make it look as though Nemo and his friends are actually IN the REAL aquarium. Only at Disney…

This is hands-down our favorite place to eat at Epcot.

It’s delicious counter-service Mexican with outdoor dining by the lake.

It’s also a great spot to watch the nightly fireworks show IF you can snag a seat.

But, watch out for the birds stealing your food at this one ;-).

Order the empanadas and churros. Yum!

This is the more expensive way to dine in Mexico but worth doing at least once.

You dine under the night sky inside Mexico while a volcano erupts in the background. We opted for this on our honeymoon.

You can also enjoy the ambiance with a quick ride on Mexico’s boat ride, which does not usually have a line, and is silly but fun.

For a fun German biergarten experience! Reserve in advance.

Because I LOVE a good French crepe! This is a cart outside France.

Because I am obsessed with all things France since our trip to Paris and love to get my true Parisian ham and butter baguette, this is a must-stop for me. 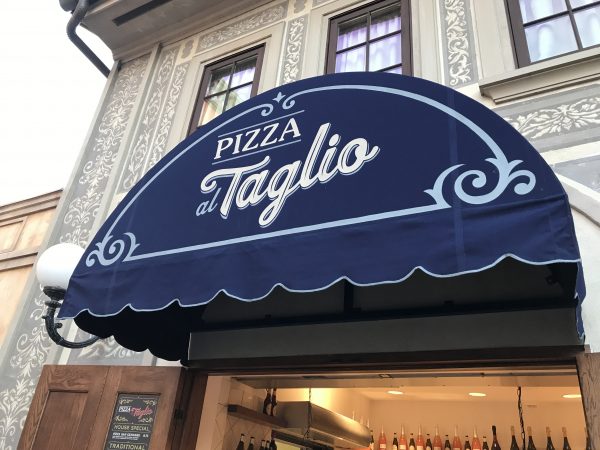 A new quick-stop eatery we discovered in 2019 in Italy (it’s toward the back so you may need to look for it!).

Get a Roman-style, square-sliced pizza just like you were ordering it off the streets of Rome and pair with a glass of Italian wine (Chianti, anyone?)! 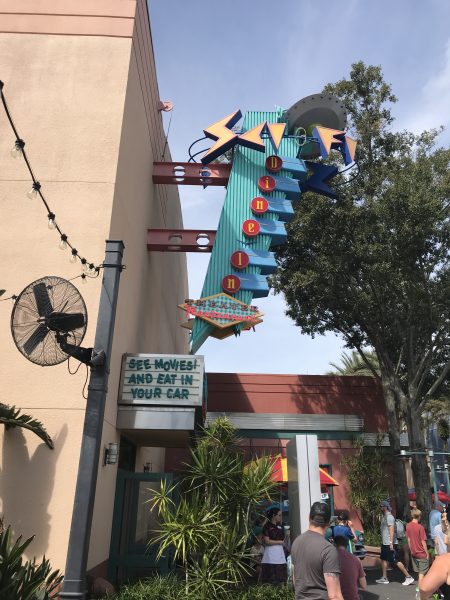 We always make a reservation to eat here. 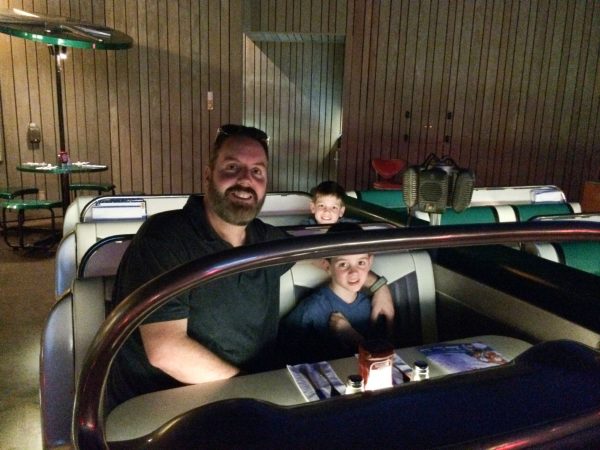 The restaurant is made to look like a dine-in movie theater where you eat in cars under the night sky while watching hilarious old Sci-Fi flicks. 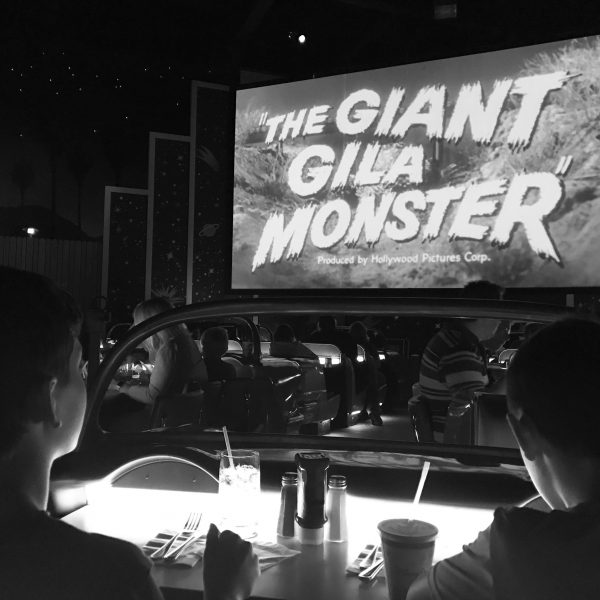 Hang out awhile to enjoy the cool and dark (and quiet!) away from the crowds. 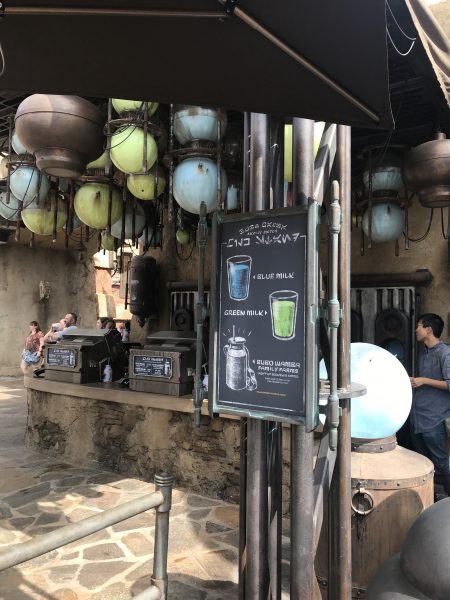 Enjoy a frozen Blue Milk or Green Milk just like the characters of Star Wars enjoy inside the Star Wars: Galaxy’s Edge area of Hollywood Studios near the Millennium Falcon ride.

We found these fun versions of soda (Coke, Sprite, etc.) in line for the Millennium Falcon ride at a drink cart, though we’ve heard they can be problematic if you try to take them back on the plane with you in carry-on as souvenirs (no joke!).

Which Restaurants to Skip

Unless you like being yelled at. We do not ;-).

The deal is the server acts like your “parent” and berates you throughout the meal.

Some think this is hilarious… but in my opinion, you can hear enough arguing just people-watching exhausted souls at Disney 😉 — and it’s free!

Located in Asia by the Everest roller coaster (which is AWESOME, though you may not want to eat this either before OR after ;-)) is this fab little Asian food joint with outdoor seating.

Beware, no straws allowed in Animal Kingdom due to animal safety.

This is a good-enough pizza stop over on Discovery Island if you’re hungry and far away from Yak & Yeti ;-). 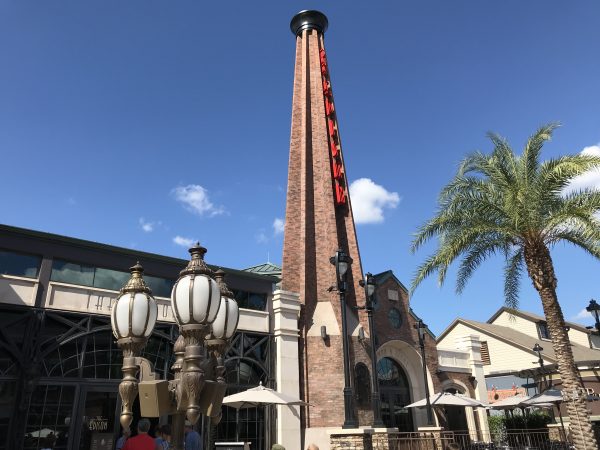 The Edison is a really unique spot decorated in “steam punk” decor with great food and drinks. Sit-down service.

My husband swears by their burger with French fried onions. 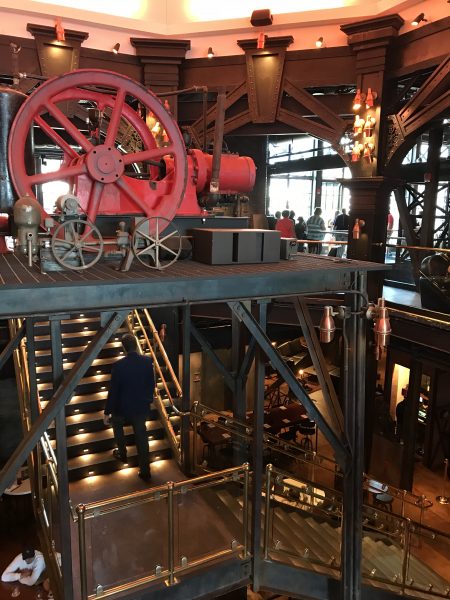 Raglin Road is a great spot for fish and chips and to enjoy a pint of Guinness with live Irish music and dancing.

Definitely a fun stop if you enjoy all things Irish and the fish and chips are delish! 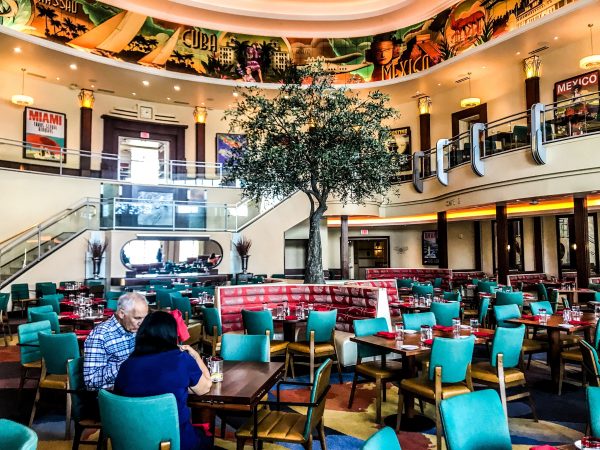 I’d never tried calamari before and tried it here and it was delicious!

Definitely something to do at least once.

It’s a unique setting inside made to look like you’re dining at night in the bayou with the old oaks with hanging moss around you.

It’s set inside Pirates of the Caribbean, so you’ll get a glimpse of it when you go on this ride.

THE BEST PLACE TO EAT. Order a Croque Monsieur (they are SO big that one is enough for TWO people) and the pommes frites shown above…

You can get Dole Whip here, too.

Super cute spot in Cars Land (one of my favorite areas of ANY Disney park) where you can get some yummy soft serve ice cream.

Told ya we know where to find it!

Another casual but fun spot in Cars Land for quick-service dining.

If you want a good Italian sit-down meal with wine. Also near Cars Land.

Where are your favorite spots to dine at Disney? Which would be on your list of best Disney restaurants?